Intervista per Meet the Artist by Frances Wilson (09/18)

“[…] Jonathan Ferucci’s recital contained a clean, bracing account of Bach’s Third English Suite, evoking ‘joy in G minor’ as he said he had been advised by Robert Levin. He had a lovely feel for the work’s buoyancy, and showed beautiful delicacy in the figurations. He then plunged straight from the final Gigue into the emotional cauldron of Schubert’s late C minor Sonata, giving a very mature performance that wasn’t afraid of the work’s darkness, not least in the growling threat in the left hand that stalked the first movement. His febrile Menuet refused to settle down, and he paced the finale like some desperate tarantella that was perpetually on the verge of collapse.”

Jonathan Ferrucci is a stunning presence on the platform – a great storyteller. In a podcast recorded earlier this week me and the contributors – Hugo Ticciati and Ariane Todes – talked about the impact stage presence can have on an audience’s engagement with the concert. Ferrucci achieves this (like seemingly all elements of his competition performance) with great aplomb without resorting to flourishes. I found his playing captivating too. Tightly controlled, energy deployed in vary degrees as and when emotion so demanded. I adored his performance. 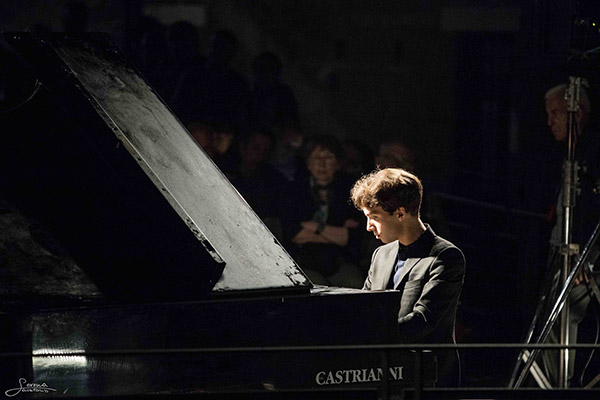 Jaques Samuel`s Prizewinners Concert at the Wigmore Hall
Always a great guarantee to see that great teacher Joan Havill in the audience as she was today for the recital of her pupil Jonathan Ferrucci ,winner of this years Jaques Samuel Intercollegiate Piano Competition sponsored by Fazioli pianos.

I came especially to remember our dearly missed Peter Uppard who was on the jury of the competition which I attended a few months ago .
I had heard all the contestants except for the first one who was in fact the first prize winner .
A very high standard from all the runners up I was very anxious to see who this pianist was that Peter had spoken so highly about that I had arrived too late to hear.
That was the last time that I saw Peter who in the meantime had lost his brave fight over a long difficult illness only kept alive for many years with an apparatus strapped to his waist that he quite amusingly referred to in his usual charming way …..he was that sort of person.
I was not disappointed as it was clear from the very first notes of Bach’s 2nd Partita that we were in the presence of a very intelligent musician who really had something important to say.

A very passionate young man who played with great verve and just the right amount of showmanship and participation that held his audience’s attention from the first to the last note .
The opening dotted rhythms played with great nobility and grandeur immediately held our attention .
Followed by clean beautifully shaped part playing .
Some very discreet ornamentation always in good taste and some really beautiful playing in the Sarabande .
The dance movements especially the final Capriccio played with a rhythmic verve that was quite hypnotic.

Some magical moments in Cesar Franck’s Prelude Choral and Fugue played with great feeling and passion in the ecstatic climaxes but also the most subtle sounds in the choral or the reappearance of the theme in the final fugue .
This final magical appearance leading to a most passionate climax and some really overpowering playing of great authority that brought the first half to a close of great virtuosity .
His great sense of rhythm in the opening chords of Albeniz’s Fete Dieu a Seville even brought a smile to Joan Havills face such was his sense of authority and immediate communication .
The transcendental accompaniment to the great melodies were played with great sense of colour and excitement .The final melting away played with some wonderful evocative colours

Le tombeau de Couperin lacked the clockwork type precision that this piece so needs but it was played with great rhythmic energy and some really extraordinary colouring.
The gentle fugue exquisitely sustained but the opening prelude a little too fast to allow the clockwork precision of Ravel to really weave its spell.
The Rigaudon and the Toccata although dispatched with great virtuosity and real musical meaning sometimes this young pianists very strong temperament got the better of him in the great final outbursts.
This will obviously come with maturity as he realises the meaning of real legato as Ravels disciple Perlemuter was so keen to point out to his students with his utmost attention to finding the perfect fingering to allow the music the real weight that was in the score.
I have to say that rarely have I seen a more beautiful pianists hands as those of this young man on the keyboard tonight.
In fact in his first encore of the Prelude for the left hand by Scriabin I thought it a little bit cheeky when he played the last note so beautifully with the right hand .
But the surprise was that that last note became the first of one of Scriabin’s most passionate studies played with enormous passion,drive and quite considerable virtuosity.

A real standing ovation from a discerning audience brought the real signature to an evening of musicianly playing with a beautifully simple and unmannered performance of the Aria from the Goldberg Variations.
A fitting end and for me memorial from this young pianist that had been so admired by our dear friend Peter Uppard .
Not quite the complete artist yet as Ullman was that same afternoon but still only 23 with already an honours degree from Florence Conservatorio and now studying for a Masters degree with Joan Havill it must only a question of time before we hear a lot more of him in the future .

To get us into the Mendelssohn groove, Guildhall Artist Jonathan Ferrucci included Variations sérieuses in his excellent pre-concert recital. Apart from his formidable virtuosity, this young Italian-Australian is an entrepreneurial self-starter with his Made in Music organisation for young musicians going strong. His playing in Bach’s Chromatic Fantasia and Fugue disguised a steely control with an expertly judged spontaneity, and some light pedalling and impressive cursive fingerwork accentuated the music’s angularity. The sighs and downward contours of the Mendelssohn showed him completely at ease with the music’s faux-Baroque, severe romanticism and its immense technical requirements, the latter defining the rippling muscularity coursing through Bartók’s Sonata. Jonathan Ferrucci is a name to watch.